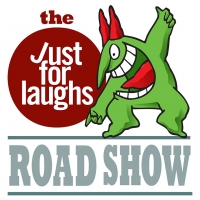 Don’t miss four of the best stand-up comedians from the world’s largest and most prestigious comedy festival when the 16th edition of the Just for Laughs Road Show tours across Ontario this spring.

Mo Mandel has been on fire on all fronts.  Along with making recent appearances on CBS’S hit show, 2 Broke Girls, and Comedy Central’s new sitcom, Corporate, Mo just released his first hour special on Amazon to critical acclaim, and the series that he created and executive produces, Comedy Knockout, recently premiered its 3rd season on truTV.

Tom Thakkar is a New York-based stand-up comic, actor and writer originally from Bloomington, IN.  Tom first burst onto the international comedy scene in 2015 when he was named a “New Face” by the Just for Laughs Festival in Montreal.  He spent the next two years working on his craft in the cutthroat New York stand-up scene and touring regularly with friend and fellow comic Nikki Glaser.  Then in November 2017, Tom made his late night debut on Conan and performed in the finals of the 2017 NBC StandUp for Diversity Competition on the same day.

A killer combination of sharp writing and warm likability has made Courtney Gilmour one of Toronto's most sought after comedy talents. As a multiple limb amputee, Courtneymanages to share her quips and musings about daily struggles with charming presence and extreme relatability. She delivered a breakout performance at the 2017 Just for Laughs Festival in Montreal by winning the Homegrown Comics Competition and filming a set for Kevin Hart's LOL Network.

The ultimate observer, ISMO is able to make people see familiar things anew through his unique perspective and uses his outsider’s point of view to find the humor in the most ordinary things. ISMO started his comedy career in 2002 in his home country of Finland and it was there ISMO wrote and starred in 2 seasons of his own sitcom, ISMO.  He filmed four DVD specials from 2008 to 2016, and has sold-out numerous concert halls and theatres across the UK and Finland. He has also performed to sold-out crowds across the world including: US, Canada, Australia, England, Scotland, Faroe Island, Denmark and Iceland.

Direct from the world’s largest and most loved comedy festival, the 16th edition of the Just for Laughs Road Show comes back to Oakville! Featuring some of the best comics from the festival, this show is bound to have you in stitches!